Memory Walk champion Kerrie and her daughters Carla and Josie.

Kerrie Gooden's mum was the kind of person who was always doing something.

"She never sat still," she says about her mum Dawn. "She was always active, with the local footy ground and community, or baking cakes by the dozen. She was a busy lady who loved life and took great pride in dressing well."

But everything changed when Dawn was diagnosed with Alzheimer's disease at the age of 70.

The diagnosis came after the family began realising Dawn's accounts of incidents weren't adding up or making sense. On one occasion she lost her car in Albury. That was when her husband finally knew she needed to see a doctor.

Kerrie accompanied her mum for the appointments and tests that followed. When the doctor told them Dawn had Alzheimer's disease it brought confusion and a sense of helplessness.

They knew very little about Alzheimer's and had no idea where to turn to for help in understanding the disease and what their next steps should be.

"I said, 'So what do we do now?' and the doctor just said there was nothing we could do," Kerrie said. "His advice was just for her to take a notepad and pen with her everywhere she goes and write everything down."

Thankfully, Kerrie found the Dementia Australia website where she she was able to find the information she needed and support for her family. She said she wished the doctor had pointed her in the direction of the organisation straight away so they would have been better equipped to deal with the challenges facing them.

"Because I think things could have been a bit more comfortable for Mum. Up until the time Mum went into care felt like a big grey area," she said.

It was her own experience and appreciation of the importance of having access to information and support right from the moment of diagnosis that led Kerrie to get involved in Dementia Australia's annual event Memory Walk & Jog.

As well as raising funds to make a difference to people like her Mum, Kerrie said the events are an invaluable way to "get information out to others who don't know what dementia is all about" as well as being around others whose families have been affected by dementia.

"It's a chance to meet and see others who are going through something similar - there's a real sense of understanding and togetherness," she said. "It's been hard; Mum's mother has gone now, and my friends are great, but it's not the same as somebody knowing what you're going through. You see what their stories were and how they got to where they were going." 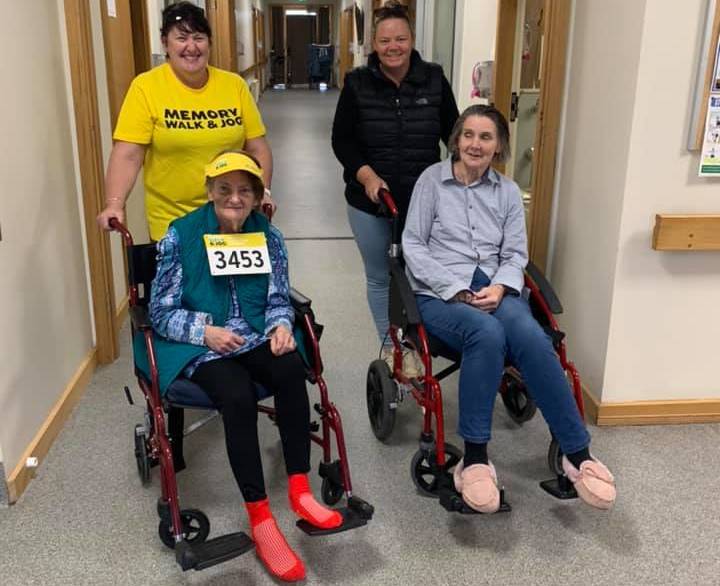 Kerrie with her mum Dawn, and Tracey Fealy with her mother-in-law, Janet Fealy.

The diagnosis that changes everything

Dawn now lives in hospital. While her doctors first said her deterioration would be gradual, in reality her condition spiraled quickly.

A month after her diagnosis she began wandering. Kerrie was torn between wanting to spend time caring for her mum and also needing to be there for her daughters who were just seven and twelve.

With the family struggling to get the help they needed to keep up, Dawn went into respite care. But an infection dramatically sped up her condition further and she hasn't been able to return home.

Kerrie misses hearing the sound of her Mum's voice at the end of the phone - Dawn called her daughter every day for a chat. She's sad too that her Mum is missing the chance to see her granddaughters grow up.

She said coping with the changes in her Mum was very hard, Alzheimer's has taken the person she knew.

"She was always quite tough; you wouldn't see her emotions. But now she's always crying and wanting cuddles from the nursing staff. The change is quite confronting," she said.

The health restrictions meant Kerrie ended up joining others for virtual "walks" to continue to raise funds and raise awareness but she's enthusiastically looking forward to 2021.

"We'll definitely be doing Memory Walk & Jog again and maybe even create one in our community," she said.

In the meantime, she's been working hard to continue to raise money. Her first shared fundraising page on Facebook generated $300 in donations. She also shared facts about the number of women with dementia in Australia, which encouraged further donations and shares.

"Just the basic stuff was so successful, and it blew my mind, so my goal is to raise even more funds next year. It was just a great feeling with mum there in my mind, and hopefully those funds can help somebody else," she said.

Kerrie reckons that if her mum could see her fundraising efforts, she'd be "quite chuffed". "She'd be cheering, 'Go Kerrie'," she said

Get together, create a team, get active and help beat dementia. With your determination (and feet!) you'll join an inspiring community helping make a better today for the estimated 459,000 people living with dementia in Australia. Memory Walk & Jog events are being planned in communities around Australia. Get more details about the next Memory Walk & Jog in your area here.